Work on these documents is still ongoing, with some documents lacking only some text figures, others, most notably the Ghiberti, parts of the text due to the complexity of transcription. The finished project will be hosted on its own platform on a dedicated server. So, please don’t copy the present URL because right now what you see is the development version.

First some words the modern texts. First of all, Marks Smith’s reconstruction of the Latin translation of Alhacen: 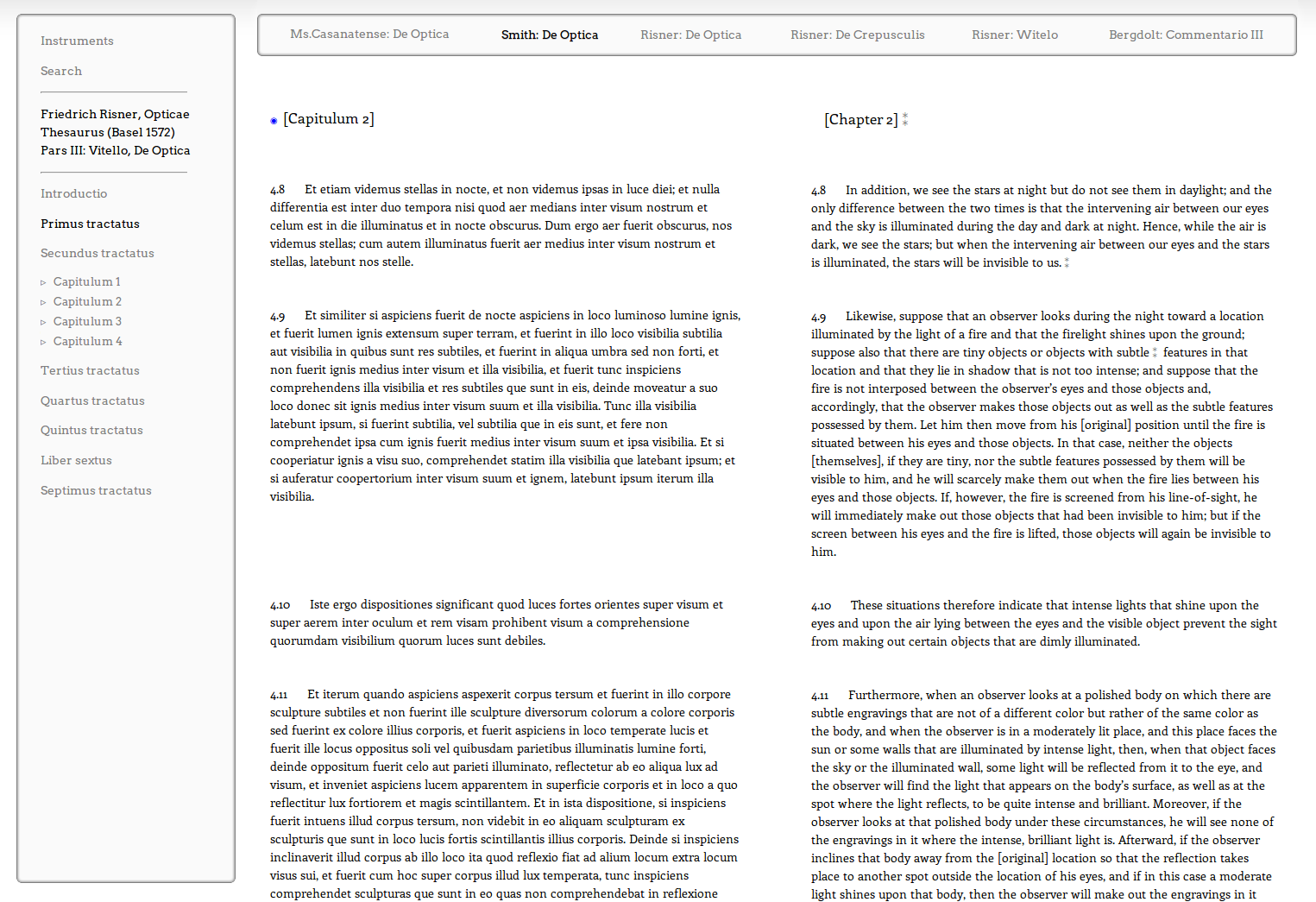 As you see, we present the Latin text side-by-side with Mark Smith’s English translation.

I’m not too happy about these pop-ups. First, because there are not visible all the time but only if your mouse hovers on top of the relevant symbol.

Second and most important, because it is hard or impossible to create a scientific annotation for a pop-up: I will come to this part later on. For now I just want to say that I will try to find another solution: maybe footnotes under each paragraph or in the page margins.

Another challenge will be to add the necessary text figures alongside the explanations provided by Mark Smith. Most probably I will present these right inside the existing text documents.

Let me also show you our approach regarding Klaus Bergdolt’s editon of Ghiberti’s Commentary, the third book. 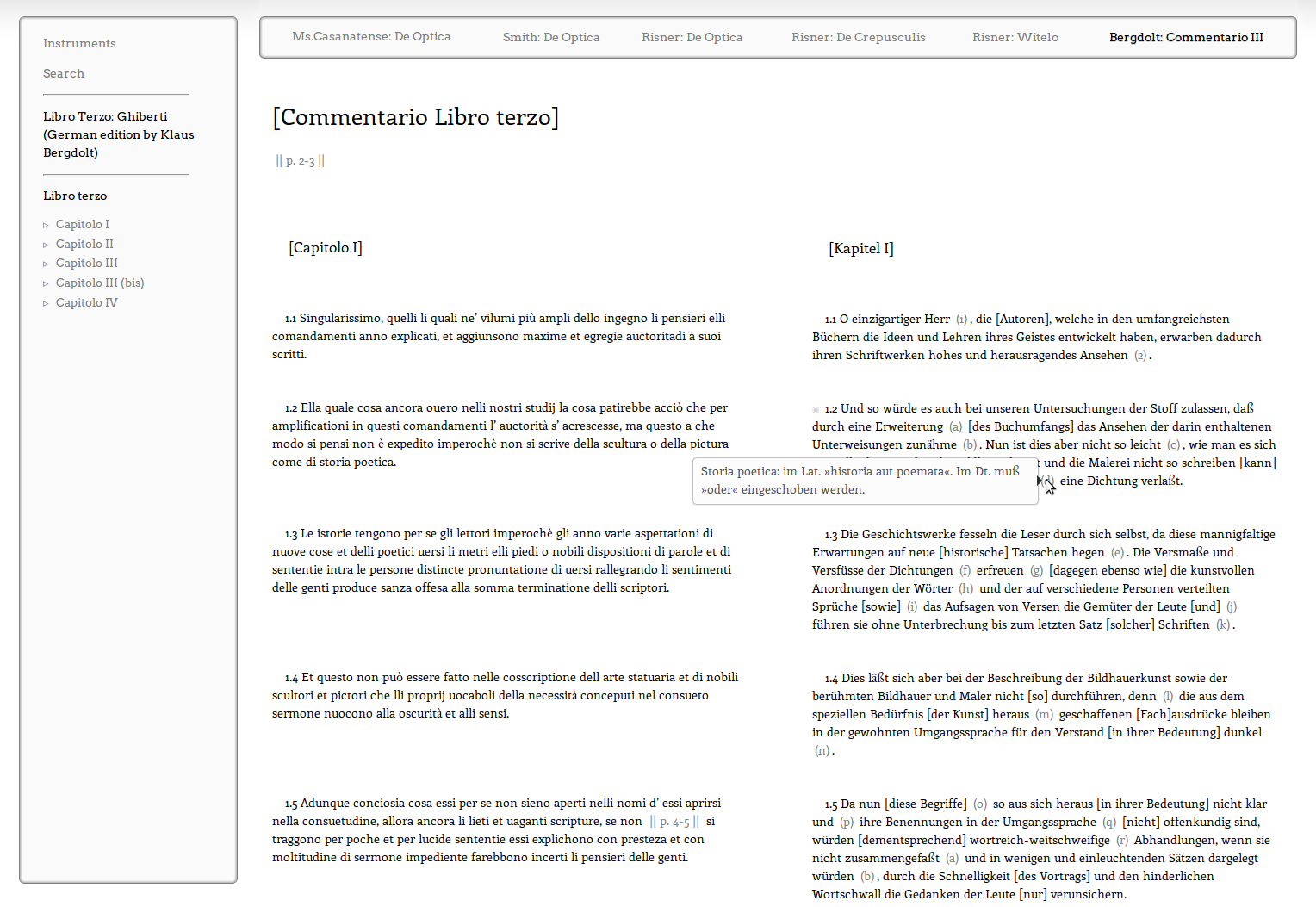 What I did here was something very similar to Mark Smith’s edition, with the rendering of the original Italian text alongside the German translation. Unfortunately, there far more footnotes and they are of two separate types: notes regarding the Italian text, like in a text critical edition, and notes regarding its interpretation.

I therefore decided to keep the original distinction by letters or numbers for each note, even more so as they are cited that way inside the text.

Since the original layout is quite complex, I also provide a link to the scanned page: 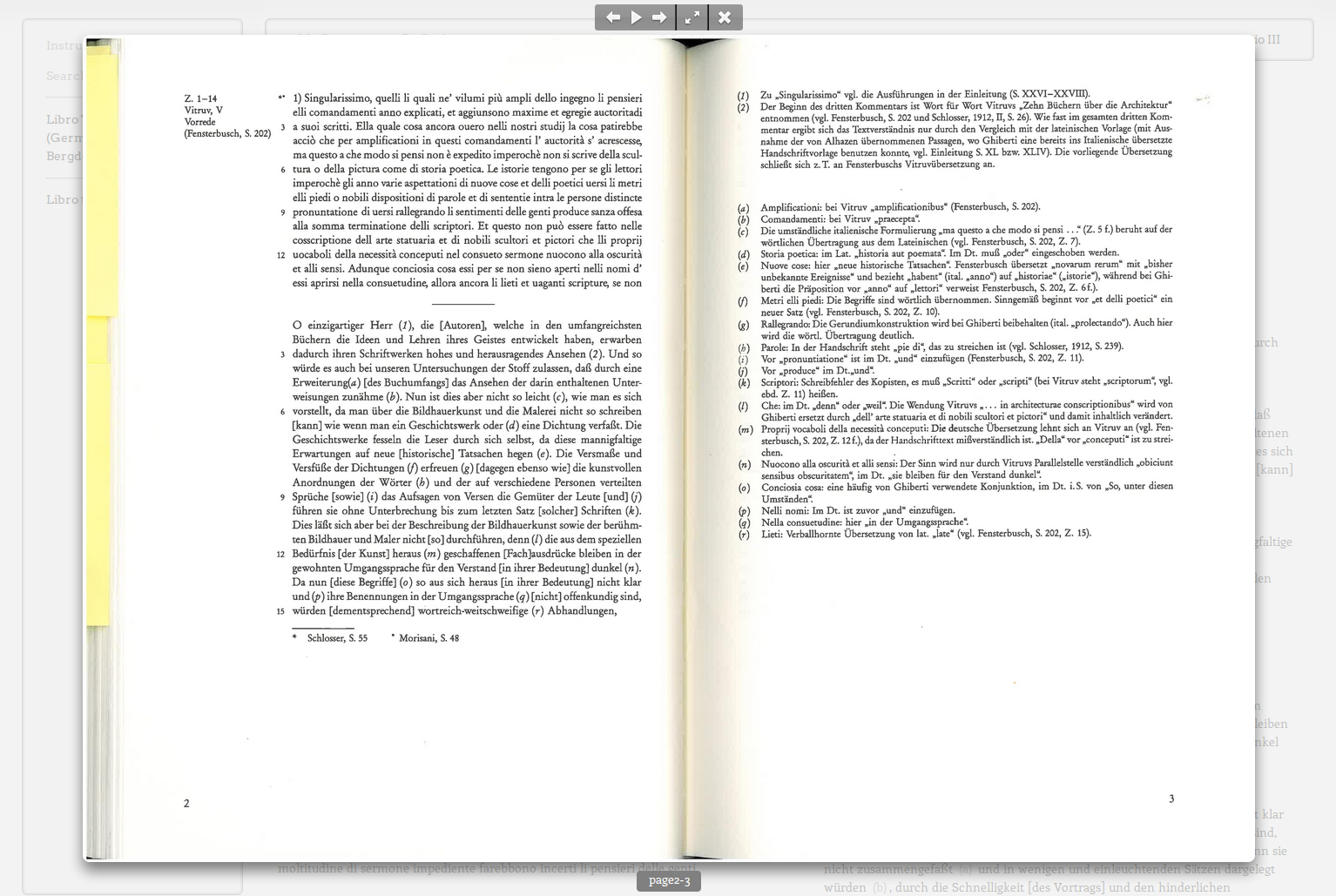 A full rendering of Bergdolt’s text will take some time, but I hope we can provide at least the Italian original and the German translation, adding the text critical notes sometime later.

I will only briefly mention the manuscript in the Casanatense library, which I show here: 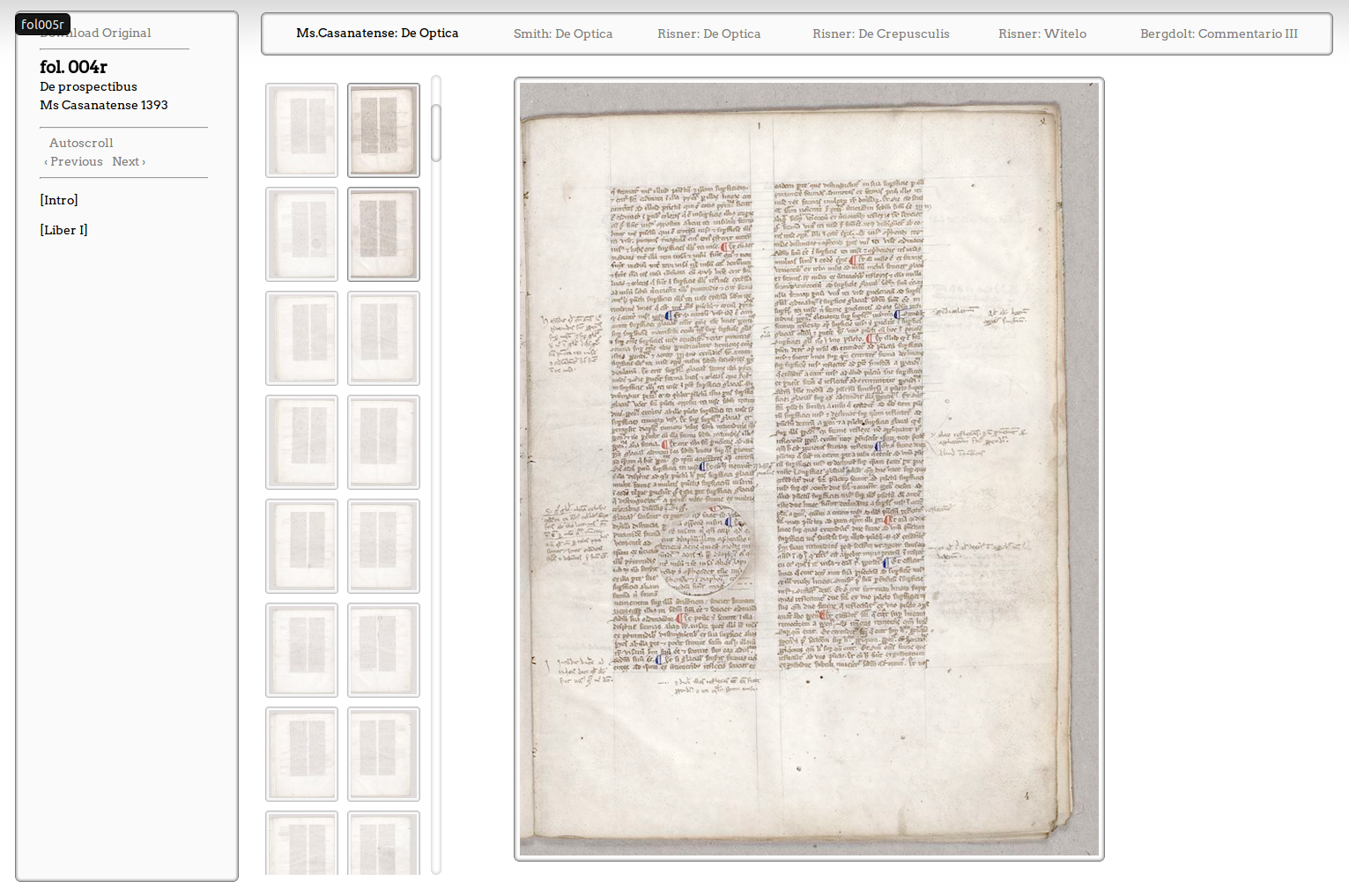 The single scans can be chosen from the middle strip and are then displayed in the main viewport, as it is more or less usual these days. We also also have an autoscroll feature which guides you through the document.

We took special care to display the single scans always with maximum screen size, that is the page scan automatically adapts to various screen dimensions.

As I mentioned earlier, we are also in contact with the Vatican library for a presentation of their manuscript inside the Perspectiva+ platform. Let’s hope we can get their permission!

I will now speak of Friederich Risner’s edition of Alhacen and Witelo, which was printed in 1572. 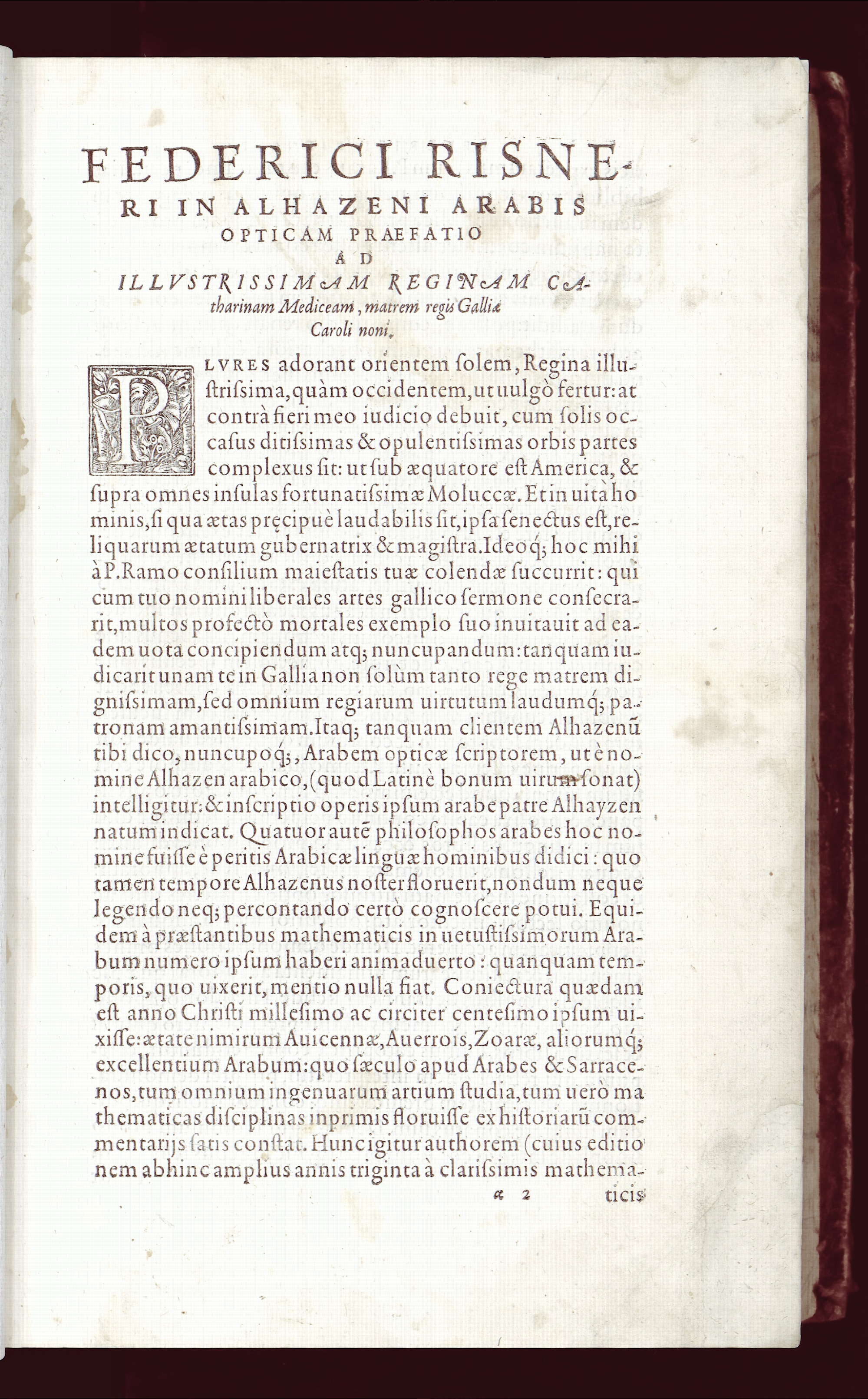 The scans for the print edition have been provided by the Documentation Service Strasbourg and  the transcription was done by the ECHO project of the Max Planck Institute for the History of Science.

As of today, the text presents all the original type forms, abbreviations and ligatures. Here is a sample:

Obviously, a normalized transcription, like the one displayed by the ECHO project, would be much nicer. But before I set out to modernize the transcription the underlying text first has to be checked for typos (of which there are many).

Let me now turn to the task of turning the digitized text into modern edition.

Text presentation always depends on its audience, its medium, and its time and place.

For the Perspectiva+ project I tried to create a modern Risner which is highly legible and reusable for research.  Therefore I did not want to maintain all aspects of the original print edition.

This means that the layout is adapted to modern medium and a modern audience by re-ordering the text flow, reconnecting line breaks, suppressing page breaks, and so on. I always opted for legibility and re-usability.

First, the whole text of each of his books has been put together in one web page, allowing for easy scrolling and searching:

A hierarchy of first, second and third level headers for books, chapters and sections is presented in the toolbar on the left.

For better readability, page break markers are put inside the running text, instead of breaking the text flow:

In order to give readers the chance to check the original page I’ve made the small page break markers clickable: 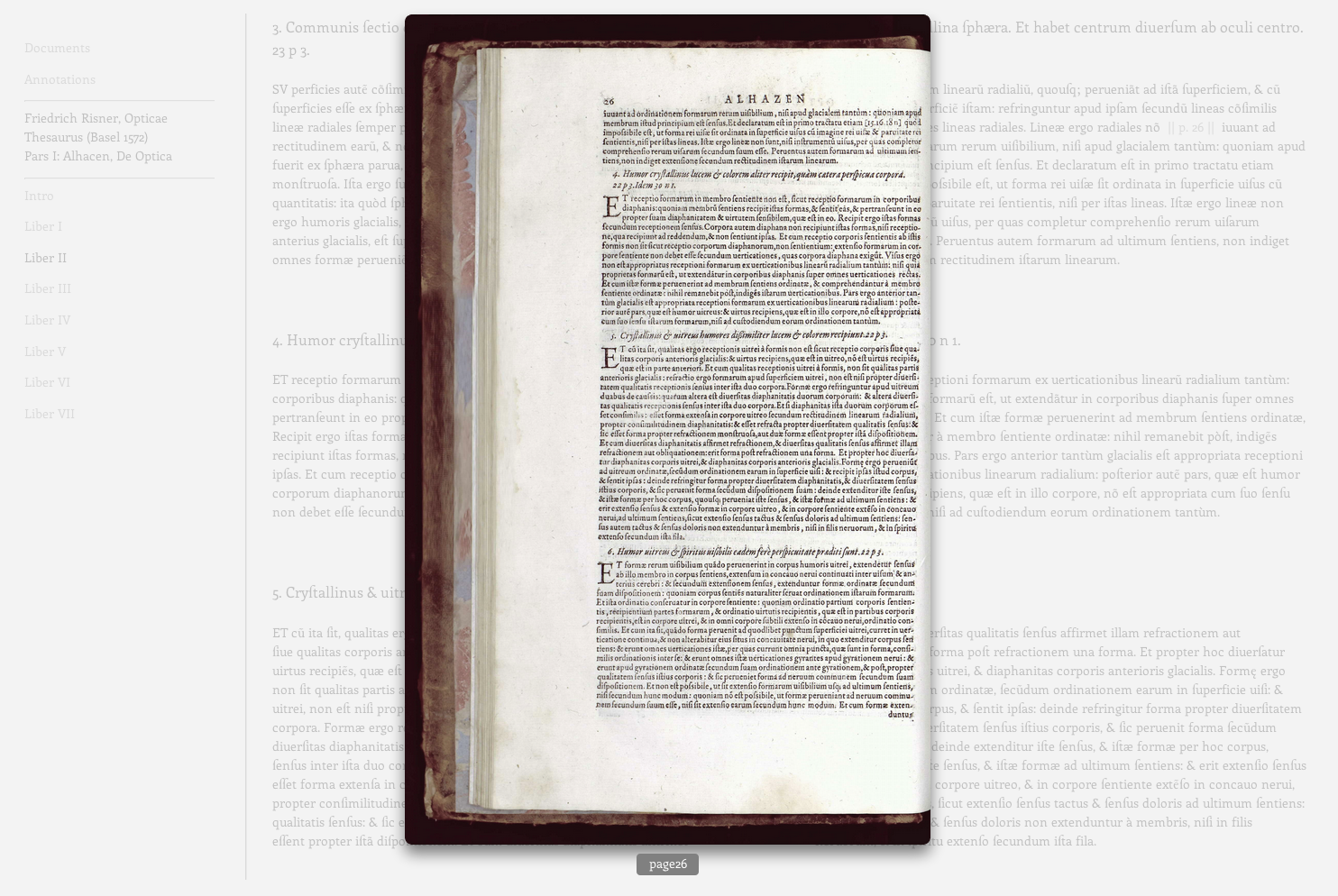 I further introduced a »liquid text flow« with 1, 2 or 3 columns which allow for optimum readability on different screens. Mobile browsers will render the text on 1 column: 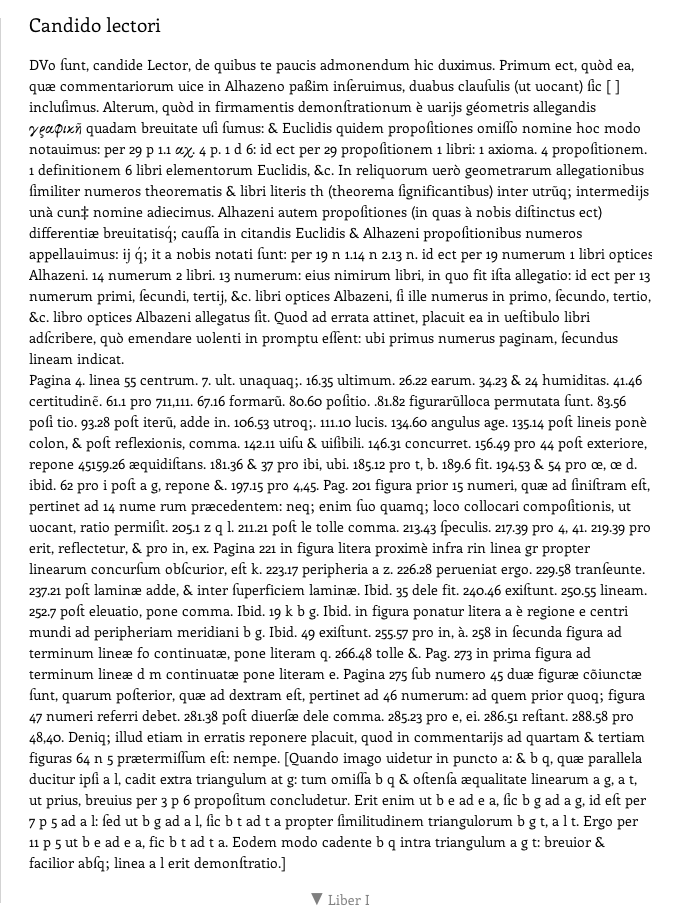 Most older screens will end up using 2 columns: 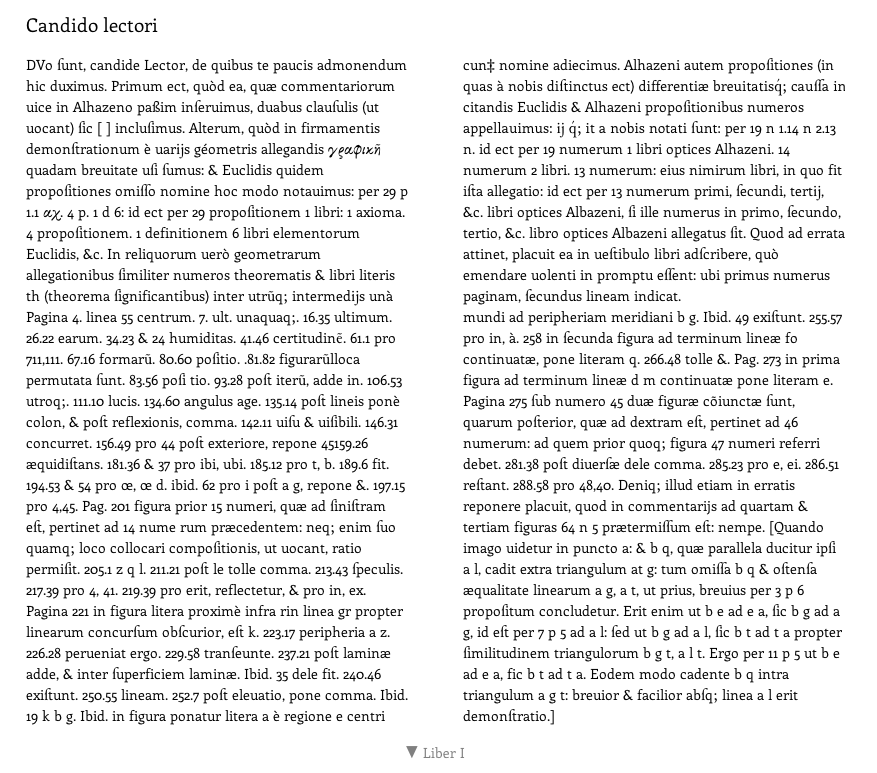 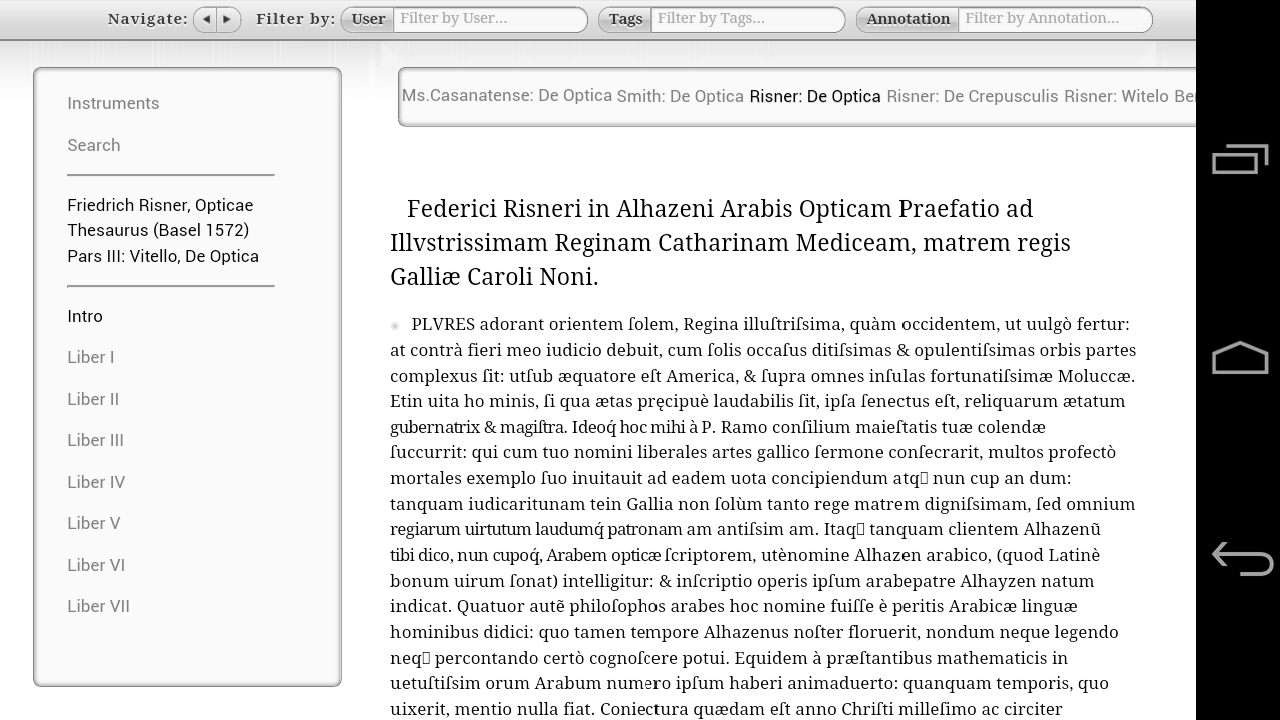 Since text flow is different in our digital version, figures will also be positioned differently than in Risner’s edition – although we managed to keep them still within the original paragraph. Here’s an example from Risner (p.6): 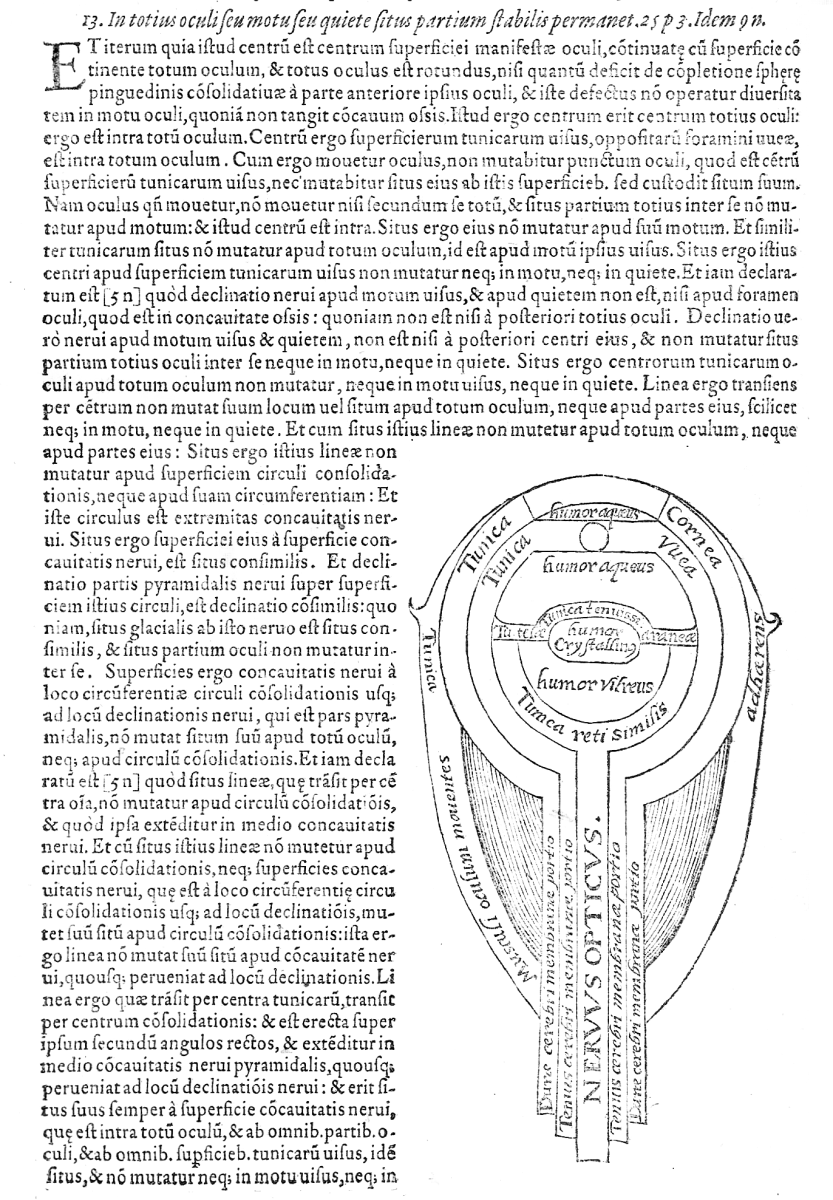 And here’s our digital rendition in a 2-column layout: 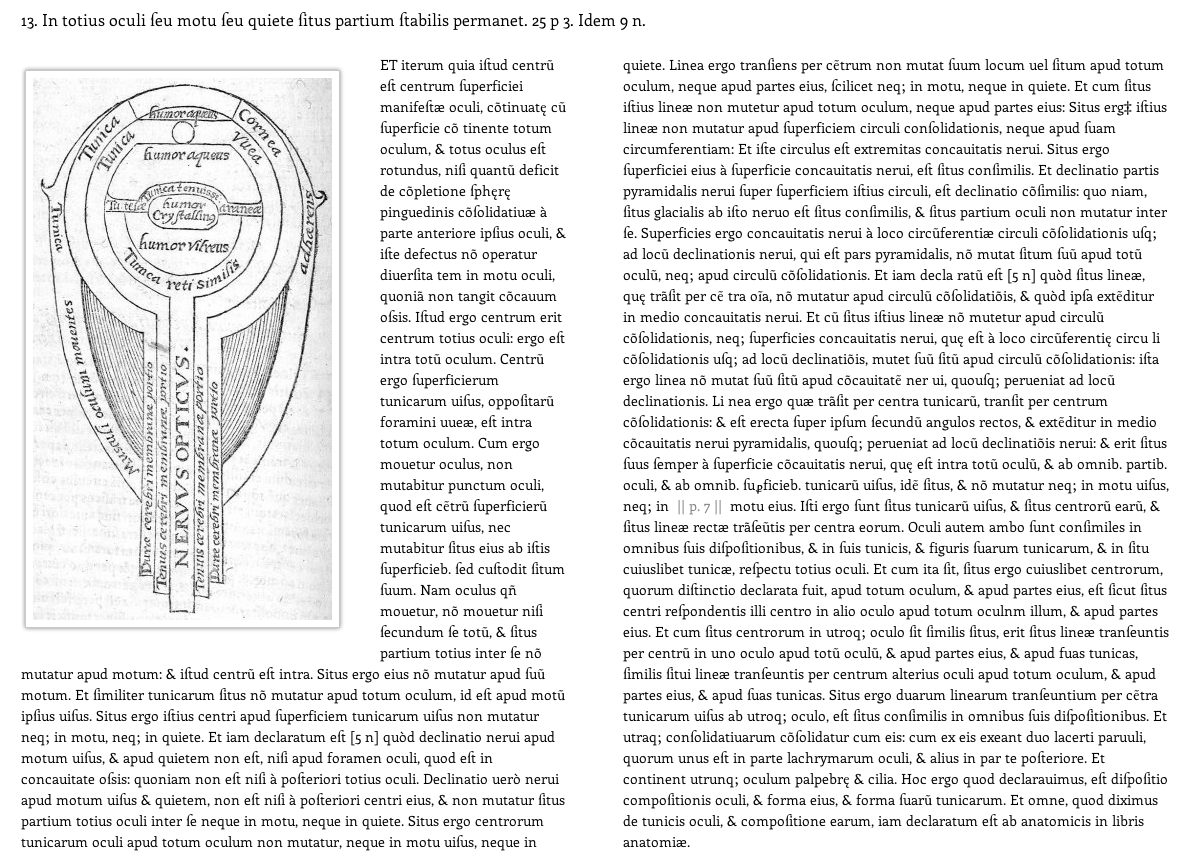 Unfortunately, the resolution of the scans available to us was too low to allow for further enlargements.

All images – the single scan pages and the text figures – have been artificially enhanced or corrected as to:

These interventions might be regarded as heretic, but please keep in mind that our goals are legibility and usability – not the presentation of a specific historical document in its most authentic state.  Anyone interested in the actual state of the specimen has to consult the uncorrected RAW files or, better yet, the document itself.

As to fonts, for the main text we use a combination of Enriqueta and, for a few special characters only, Junicode. Both fonts’ X-height has been been aligned in order to make them nearly indistinguishable. Here’s an example of both fonts used together:

All fonts are automatically downloaded and used inside the browser — the user won’t even notice it.

Let’s now see what we did to make the texts accessible and reusable for research.

Most important for scientific use are stable citation links. We therefore implemented not only links to whole books, but also to fragments like chapters, sections and single paragraphs.  These links are represented by blue circles:

They can easily be copied:

Links are also important for creating annotations. In fact annotations were a high priority for us.

At the start of the project we defined the basic functionality an annotation system should provide:

And, the most basic questions:

Some systems do not allow their users to make annotations to any website or text on the internet, but only to a given website. Kind of user lock-in where the annotation tools can only be applied on the documents hosted on one specific web site.

As of today, no available system fulfills all requirements. We decided therefore to … give our users a choice of some of the best existing tools. We aim to deploy 3 annotation tools:

First, Annotator: a free/open source annotation tool which can be used for the Perspectiva material but also for other websites. It’s only down side as of today is its lack of backend functionality.

Second, Annotary: a relatively young proprietary annotation system which also works anywhere in the web with a nice graphical backend,

Third, Highlighter: another commercial system with a really great backend but which is restricted to the Perspectiva website.

Our users can test these tools and choose the annotation system they prefer. A short help section for how to use the different systems is displayed on every page.

For sake of brevity, I’ll now show only the Annotator system, mainly because it’s the most technically interesting.

Annotator is one of the projects hosted by the Open Knowledge Foundation (link). Its development (link) is being done alongside the specifications to an annotation framework defined by the Open Annotation Collaboration project (link). Therefore there is little chance  that the service could one day get shut down. From an end user perspective, this means vendor-neutral annotating, and even a possibility to be compatible with future annotation services.

Here are some screenshots of the Annotator tool in use on the Perspectiva+ site.

We highlight some text and click on the symbol for annotations …

The annotation window pops up  …

We start to write our annotation … in this example we want to refer to a similar introduction by Risner made in part II of his volume on optics, by Vitelo.

Instead of a mere text we want to give a direct link. So first we create the title, using square brackets, …

Then we prepare the actual URL link, using parentheses. Now we have to switch to the text we want to link to and copy the citation link!

Here we are in the Vitelo part of Risner’s publication – the blue buttton becomes visible on hovering and shows the citation link.

Here we copy the link … a right-mouse-click will do …

And here we paste the link in our annotation:

We save the annotation …

And we’re done.  The ugly code has become invisible leaving only a nicely formatted link:

The use of cross-links inside documents or from one document to another (even on another website!)  allows scientific reuse. Different users can annotate the documents, re-edit them and, if they want so, even share their annotations.

What’s still lacking in the Annotator system is a print functionality, so users can print their annotations alongside the original documents, and annotations for images. We hope to be able to provide at least the latter inside the project time frame.

by kew Posted on August 12, 2012
Posted in Annotation | Leave a comment 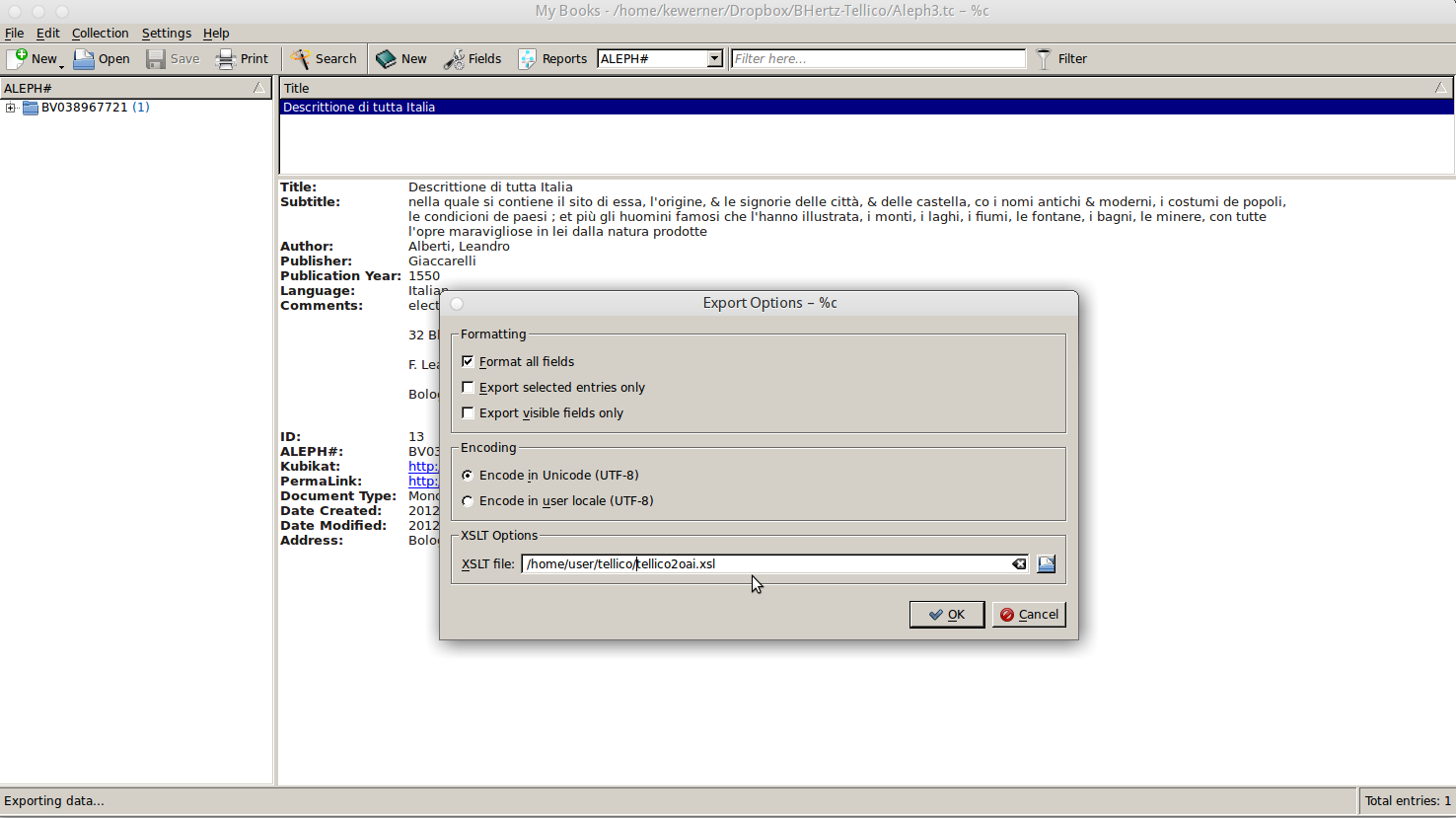 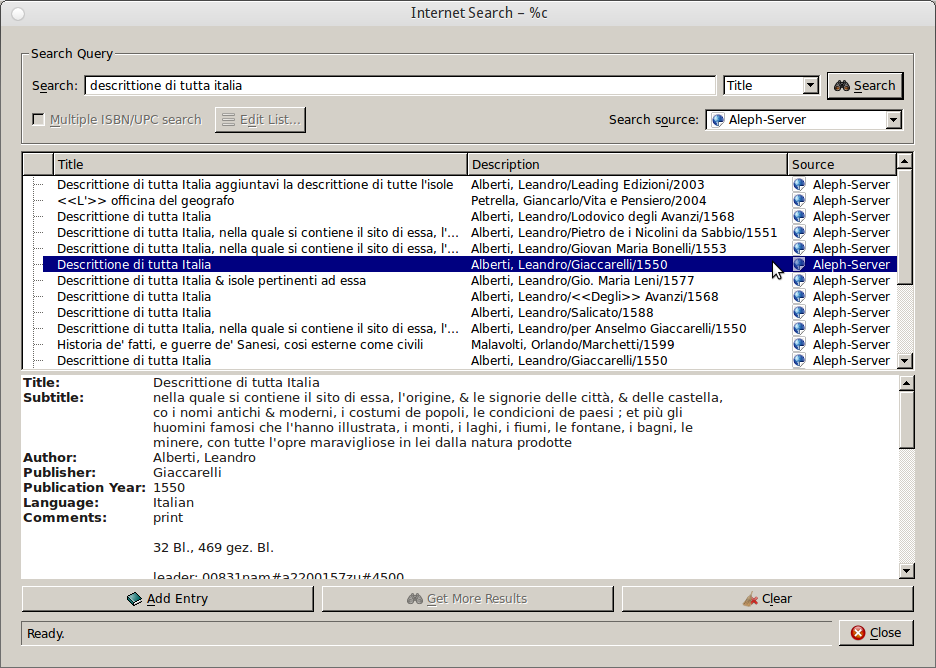 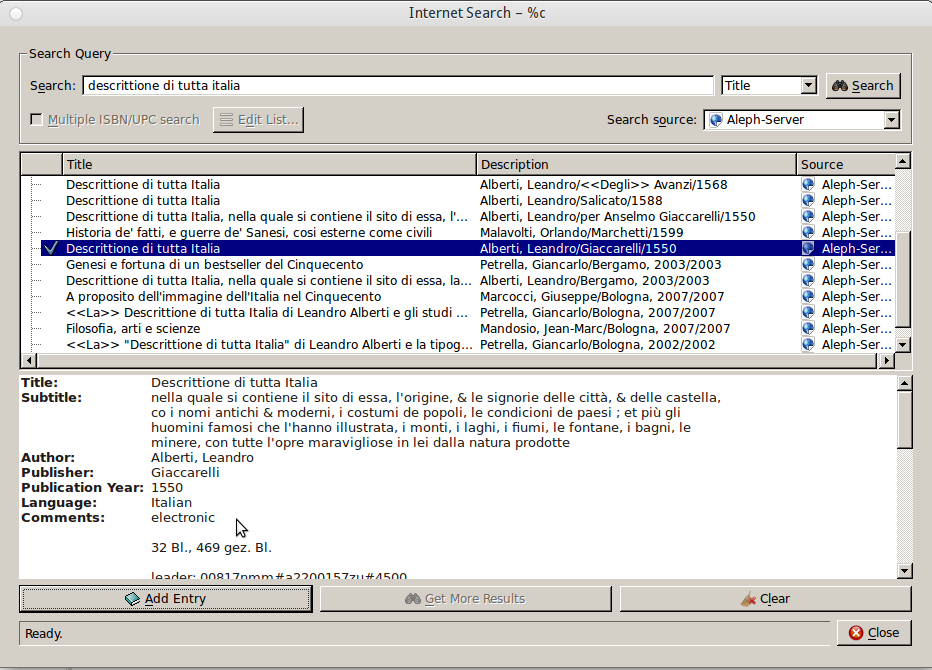 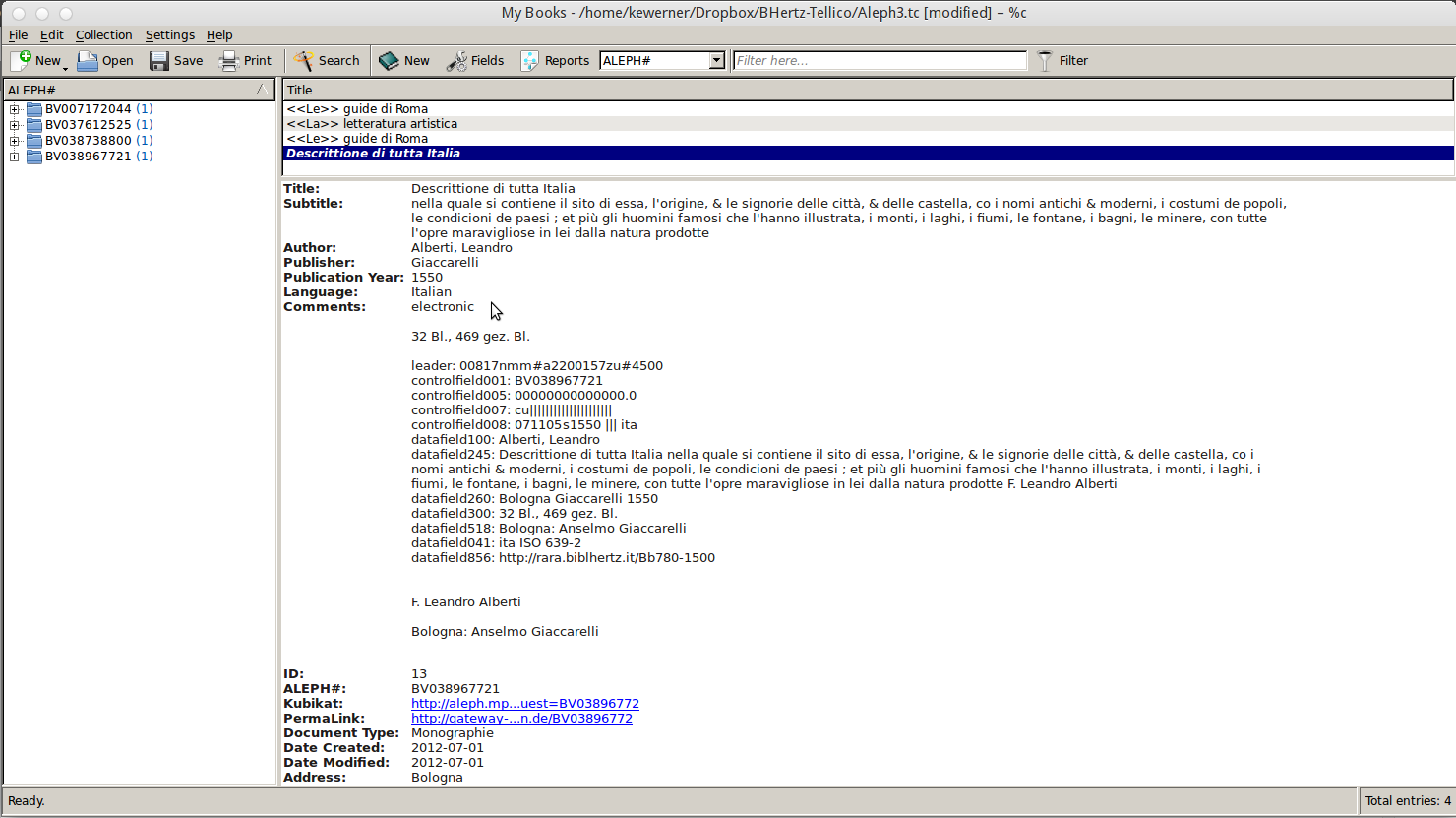